As outlined in my previous posts, I went through the trouble of scraping over 15 years of one of the leading independent music websites. Pitchfork shaped my record collection over the past 10 years I have been reading the publication, but nowadays it feels like a totally different website. I wanted to take a look and see if there was any evidence that supported my intuition.

Before I get too into the weeds, I want to call attention to four events in recent Pitchfork history that I expected to be inflection points in the site’s direction. The first three events are turning points in how Pitchfork conducted its business and its reviews and the last was (what I suspected) a turning point in the site’s critical focus.

I first wanted to see how consistent the site has been in sticking to its publishing schedule. 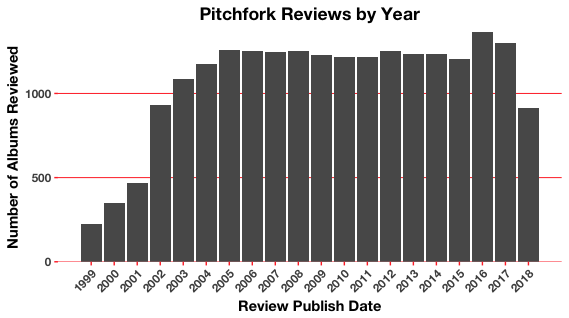 The chart shows that the site has been surprisingly consistent over the past 10 years. Some of this fluctuation is partially due to my methodology - I count reviews in which multiple reissues are analyzed in one editorial (such as this review of Lifter Puller reissues) as multiple reviews.

I suspect there’s a confluence of factors as to why there are so many fewer reviews prior to 2002. One, there’s a good chance the site finally picked up enough after the turn of the millennium to pivot from Ryan Schrieber’s passion project to a full-blown publication. Two, the site has changed content management systems since it was first created and it’s likely some reviews got lost along the way. Third, there is evidence (via cross-referencing with archive.org) that Pitchfork has removed some of its most controversial reviews and I expect their older reviews are more likely to be irreverent and inconsistent than newer reviews.

It’s also worth noting that the site appears to have doubled down on its review efforts since its acquisition by Conde Nast. The increase in the number of reviews in 2016 is larger than the 50 or so Sunday reviews that wouldn’t have been present in previous years. Although the the move to post reviews on Saturdays was billed as just a shift in publishing patterns, it seems to have led to more reviews overall.

Even though the site publicized its publishing shifts in 2015, I believe they had experienced an unpublicized editorial shift years earlier. The emergence of poptimism and the economics of web publishing in the 2010s forced the site to pivot its focus away from the independent rock records that propelled the site to prominence.

The below chart shows the percentage of reviews in a year that were associated with a given genre. 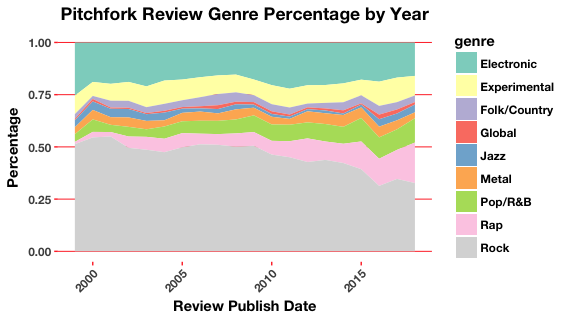 The above chart bears out my hypothesis, but I’d like to point out some notes that I had not anticipated at all.

My biggest takeaway from the above chart, however, was how Pop and Rap coverage has begun to slowly replace the site’s rock reviews. 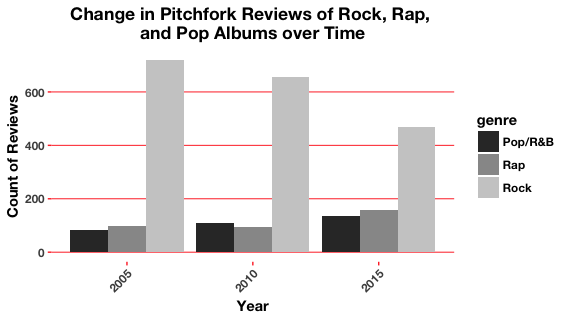 I had anticipated this before I had even looked at the chart. The aforementioned Kanye review was a huge indicator to me, as were glowing reviews of Future and Kendrick Lamar records. But the site’s coverage of Drake, which included multiple stories detailing his association with lint rollers, drove home the site’s dedication to rap and hip hop. I was surprised that this mainstream coverage was muscling out rock reviews instead of the occasional Jazz or Global music review.

Pitchfork is also well-known for using the entirety of its 10-point review scale. Many publications treat a 10-point scale in the same was as the American school system’s letter grades - 90 or above is an A, 75 is a C, and anything 6 is below is a failing grade. Pitchfork was not afraid to dip below 5 if the writer and editorial board did not like a record and didn’t shy away from truly abysmal grades and kicking a band while it was down. The below chart shows how often Pitchfork has “panned” (granted a score of 5 or lower) a record as well as how often they have “ravaged” (2.5 or lower, my terminology) a record. 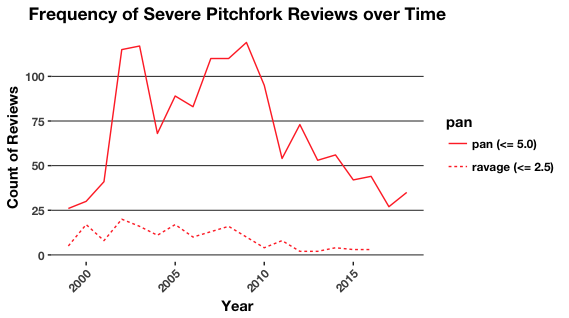 I think it’s really interesting that, although these negative reviews led to the site’s infamy, they backed away from such coverage when they started to gain mainstream success. In the span of two years, from 2008 to 2010, they halved the number of records that they gave really negative grades.

The practice of totally eviscerating a review appears to be dead. One of my favorite writers, Ian Cohen, served up the last one of these reviews in 2016 when he covered an EP by rap-rock supergroup Prophets of Rage. 2017 was the only year that I analyzed that did not have a review that met this threshold, although this Ed Sheeran review makes me wonder if I should have raised my cutoff a few fractions of a point. Even when they want to be truly scathing, the scores given to albums seem to be reverting to the mean.

Lastly, I wanted to look and see if the change in review severity had an outsized effect on the coverage of any particular genre. I expected each one of these charts to trend downward, following the overall trend toward less severe scores, but with this even slightly increased percentages on this chart indicate a much more critical staff. 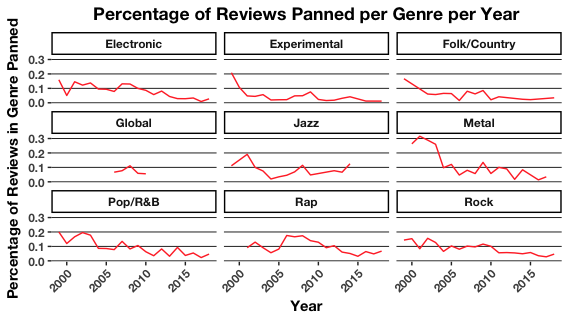 Although this is just a broad overview of the body of reviews at Pitchfork, I feel it confirms my hunches that the publication’s genre focus and hyper-critical voice have shifted since I began reading it years ago.

I have some other ideas of things to investigate using this data in the near future, but don’t hesitate to reach out if you have a burning question that you think I may be able to quantify. For any other data folks reading this, I have included the R Markdown notebook I used to create the charts in the project’s GitHub repository and plan to post a write-up on my experiences wrestling with plotting libraries in R and Python in the coming weeks.